To help optimising (electro- or photo-) catalyst and reactor operations simultaneously, it is important to develop tools for in situ characterisation of nanocatalysts under realistic reaction conditions to monitor the dynamics of catalysts with high spatial, temporal and energy resolutions. How a catalyst works is rather complex: molecules adsorb to surface of catalyst and onto support, catalyst sits on support; different molecules move on facets and interact; product molecule desorbs, ... Of particular interest for catalysis chemists is the simultaneous dynamic in situ characterization of the chemical, morphological and structural (strain, defects, …) dynamical evolution of individual nanoparticles at high resolution and (near) operational conditions. 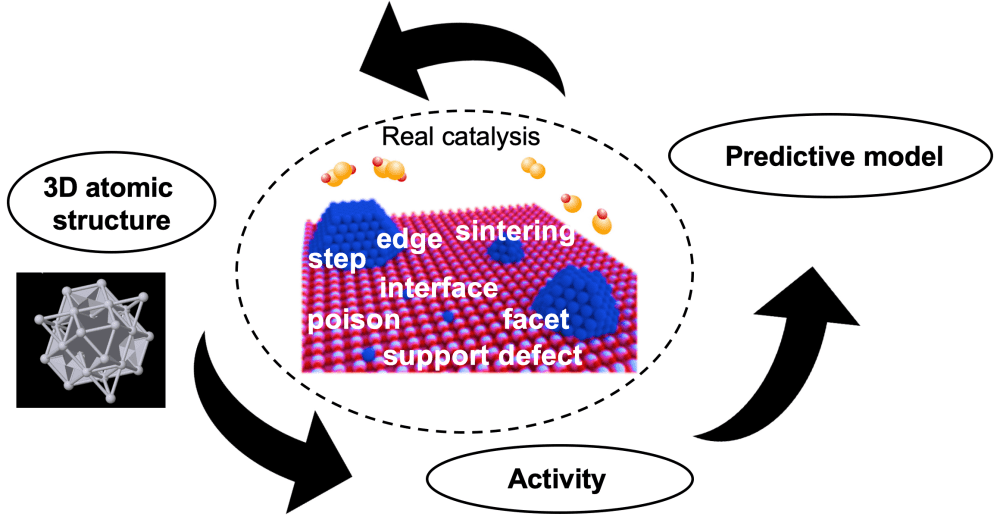 Among all the x-ray diffraction techniques, coherent x-ray diffraction (CDI) is one of the most promising. When applied under Bragg conditions, CDI has a unique sensitivity to atomic displacement and strain. The local symmetry of reciprocal space can be broken giving rise to a complex object in direct space, whose modulus represents the electron density of the object, and the phase, i.e. the displacements of these electron density portions relative to one another (with pm sensitivity), corresponding to strain. Progress in the catalytic issues requires the creation and development of new groundbreaking CDI methodology and techniques.

The development of in situ and operando CDI under well-defined catalytic conditions is thus of highest priority and extremely timely as the technique can probe structural changes in individual nanocrystals under conditions where up to now, no other technique could probe the relevant structural parameters.

The CARINE project will include two important advances:

1) the development of new in situ and operando environments (including temperature, gas and mass spectrometry analysis) compatible with nano-focused x-ray beams,

2) algorithm development for improved resolution and reproducibility in reconstructions.

The project is divided into 4 workpackages (WPs):